This is part 2 of a 2-part series on the proposed Tax Cuts & Jobs Act and generally covers the provisions applying to small businesses and self-employed taxpayers. Part 1 covered the individual taxpayer provisions. If you missed that part, click here.

The House Ways and Means Committee included a substantial number of proposed tax changes affecting businesses in the Tax Cuts and Jobs Act. This article covers those proposals generally affecting self-employed taxpayers and small businesses. When reading the information included in this article, please keep in mind that it is PROPOSED legislation and is not law yet. However, it does give you an insight to what may be coming. These provisions would be effective in 2018 unless otherwise noted.

Maximum Tax Rate on Business Income of Individuals – Among the goals that the Republicans want to accomplish with tax reform are simplification of the tax code and making it fairer. However, those two aims seem to collide when it comes to how they propose to tax higher-income individuals on their pass-through income. The proposed approach will complicate tax returns for many of these individuals.

Currently, income from a self-employed business, partnership and S-Corporation is passed through to the business owner, or the stockholder in the case of an S-Corporation, and is subject to the taxpayer’s personal income tax rates.

Under the proposed act, a portion of net income distributed by a pass-through entity to an owner or shareholder would be treated as “business income” subject to a maximum rate of 25%, instead of ordinary individual income tax rates. The remaining portion of net business income would be treated as compensation and continue to be subject to ordinary individual income tax rates.

Owners or shareholders receiving net income derived from an active business activity (including any wages received) would determine their business income by reference to their “capital percentage” of the net income from such activities.

In most cases, taxpayers actively participating in businesses involving the performance of services in the fields of law, accounting, consulting, engineering, financial services, or performing arts (i.e., personal service businesses) would not be eligible for the 30% capital percentage but would be allowed to use the facts and circumstances formula.

Business Expensing – Under current law, when a taxpayer acquires a business asset, a taxpayer must depreciate the cost over the asset’s useful life. However, a taxpayer can utilize the bonus depreciation allowance or Sec 179 expensing rules to increase the write-off in the first year. The act would permit 100% unlimited expensing of tangible business assets (except structures) acquired after September 27, 2017, and through 2022. This provision would apply for the tax year when a taxpayer first uses the asset. The asset would not need to be new to qualify for the unlimited expensing.

Sec 179 – Currently a taxpayer may immediately expense up to $500,000 of the cost of Section 179 property, with the deduction phasing out when the costs of eligible property exceed $2 million. These amounts are inflation-adjusted and for 2017 are $510,000 and $2,030,000, respectively. The act would increase the annual expensing limit to $2 million, and the phaseout would begin at $20 million. If enacted, this provision would be effective for assets purchased and placed in service after 11/2/17.

Business Interest Expense Limitation – Under the act, the interest deduction for businesses would be limited. However, the act carves out an exception for small businesses with gross receipts of $25 million or less.

Business Entertainment – Under current law, when a taxpayer establishes that an item was directly related to the active conduct of the taxpayer’s trade or business, a taxpayer can deduct 50% of the cost of business entertainment. Under the act, no deduction would be allowed for entertainment, amusement or recreation activities, facilities, or membership dues relating to such activities or other social purposes. However, the 50% limitation would continue to apply to expenses for food or beverages and to qualifying business meals.

Sec 1031 Exchanges – Under current law, gain from the exchange of most business or investment property can be tax-deferred when the property is exchanged for like-kind property. Under the act, tax-deferred exchanges would only be allowed for real property after 2017.

Self-Created Property – Under current law, a self-created patent, invention, model or design (whether patented or not), or secret formula or process is treated as a capital asset and subject to capital gain rates when sold. Under the act, these items would be subject to ordinary tax rates upon sale. In addition, the election to treat musical compositions and copyrights in musical works as a capital asset would be repealed.

Domestic Production Deduction (DPD) – Under current law, taxpayers are able to claim a deduction equal to 9 percent (6 percent for certain oil and gas activities) of the lesser of the taxpayer’s qualified U.S. production activities income or the taxpayer’s taxable income for the tax year. The deduction is limited to 50 percent of the W-2 wages paid by the taxpayer during the calendar year. Under the act, the DPD would be repealed after 2017.

Business Credits – The act would make the following changes to business tax credits:

Personal Service Corporation Tax Rate – Corporations whose principal activity is the performance of personal services in the fields of health, law, engineering, architecture, accounting, actuarial science, performing arts, or consulting and where such services are substantially performed by the employee-owners, would no longer be able to use the graduated tax brackets and would be taxed at a flat rate of 25%.

Net Operating Loss (NOL) – Carryback of NOLs arising after 2017 would be repealed, except for a one-year carryback allowed for a loss in a federally declared disaster area incurred by a small business (gross receipts under $25 million) or farming trade or business. The carryforward period, which is currently limited to 20 years, would become indefinite, and the loss deductible in any carryforward or carryback year would be limited to 90% of that year’s taxable income (figured without the NOL deduction). Additionally, for NOLs incurred after 2017 and carried forward, an interest factor would be applied each year that would increase the amount of the NOL to preserve its value.

The foregoing only includes the major changes, and there are other details not covered. Of course these are proposed law changes, and there is no assurance these changes will pass into law. Even if the provisions are enacted, there is no guarantee they will not have been altered from the form described above. If you have questions or concerns about these proposals, please give this office a call.

TAX FILING DEADLINE IS AROUND THE CORNER 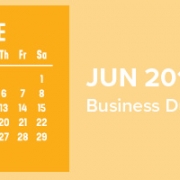 WHAT IS A KPI?