Traditional IRAs are familiar to most taxpayers, providing a relatively simple method of saving for retirement AND deferring taxes in the process. But one drawback of the Traditional IRA is that once withdrawals from them begin, distributed earnings and contributions that were tax-deductible get taxed. In contrast, a Roth IRA allows no tax deduction of contributions. However, it does allow tax-free accumulation of the account’s earnings so that at retirement ALL distributions from a Roth IRA are tax-free, both contributions and earnings. Naturally, to get this tax-free treatment, certain conditions must be met.

How Much Can You Contribute?

As with a Traditional IRA, to be eligible for a contribution to a Roth IRA, you (or your spouse, if you aren’t employed or self-employed) must have taxable compensation like wages, earnings from a self-employed business, or taxable alimony. The IRA contribution annual limit slowly rose over the years as a result of specified increases in the law, but has leveled off recently because of low inflation rates. In addition to normal contributions, taxpayers age 50 and older are allowed to make “catch-up” contributions, allowing them larger contributions in their later years to fund their approaching retirement needs. The table below illustrates the annual contribution limit applicable by age.

The annual limit applies to all of your IRA contributions in a given year. So, you can contribute to a Traditional IRA and a Roth IRA as long as the combined total does not exceed the annual IRA limits and you meet all of the other requirements.

Your income level can limit your Roth contributions. Contributions are gradually reduced (i.e., phased out) for married joint taxpayers with adjusted gross income (AGI) between $193,000 and $203,000, and for other taxpayers when the AGI is between $122,000 and $137,000. The contributions of married separate (MS) taxpayers who lived together at anytime during the year are reduced when the AGI is between $0 and $10,000. The phase out applies regardless of whether you (or spouse, if married) are an active participant in another plan. The amounts indicated are for 2019. Call this office for the rates for other years.

Note: The income limitations for making Roth contributions can be circumvented by first making a traditional IRA contribution and then subsequently converting it to a Roth IRA. Please call this office for additional information.

With Traditional IRAs, contributions cannot be made once you turn age 701/2. However, there is no such age limit for making contributions to Roth accounts.

Generally, distributions from a Roth IRA (unless due to a conversion from a Traditional IRA) are treated as coming first from contributions (principal) on which you have already paid the tax. Therefore, any distribution to the extent of the principal is tax-free. Distributions of earnings are also tax-free (qualified distributions) if:

They are not made within the five-year tax period beginning with the first tax year in which you contributed to the Roth account, AND They meet one of the following conditions:

Another big advantage of Roth IRAs over Traditional IRAs is that the former are not subject to the minimum required distribution rules at age 701/2. This means that if you don’t need to utilize your Roth IRA for retirement, you can leave it untapped for heirs (who would also get deferral on withdrawals, but would be subject to certain required distribution rules that apply to beneficiaries).

A Traditional-to-Roth IRA conversion can be made by anyone regardless of filing status or income.

Paying the Tax on Conversion

The tax on a Roth conversion may be paid either from other funds or from the IRA funds being converted. However, if you choose to pay from the IRA funds, those funds will not be considered part of the rollover. Therefore, they will be subject to early withdrawal penalties if you are under 59 at the time of the withdrawal.

Payment of the tax from the IRA funds can severely limit the benefit of a conversion to a Roth by eroding the capital that can be invested. For example, in a conversion of a $50,000 Traditional IRA to a Roth and paying the tax from the withdrawal, only $29,429 (amount left in the IRA after paying taxes and penalties) actually would get invested in the Roth account. The result, shown below in after-tax dollars, assumes a 6% interest rate and an accumulation period of 25 years. 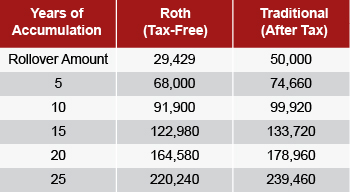 When a Traditional IRA is converted to a Roth account, the converted amount must be held in the Roth IRA for at least five years; otherwise a penalty may apply. Any converted amount withdrawn before the end of the five-year period, to the extent it was included in income due to the conversion, is subject to a 10% early withdrawal penalty even if you have reached age 59. After the five-year period has been satisfied, the 10% penalty still applies to distributions of earnings if you have not attained the age of 59 or an exception applies.

Any withdrawal made from a Roth IRA before the five-year holding period ends is treated as being made first from contributions and then from amounts that were included in income due to the conversions.

Impact of Conversions On Other Tax Consequences

When considering whether or not to convert to a Roth IRA, carefully consider how the move will increase your taxable income in the conversion year. The increase could have drastic effects on other tax consequences. For instance, the increase may:

The income “catch” for Roth conversions can be averted with appropriate tax planning. That’s why it’s important to consult with your tax advisor before making a final Roth investment decision. Only by looking at your entire tax picture will you really be able to decide whether the Roth option is best for you.

Factors That Favor Your Conversion To A Roth

Factors That Don’t Favor Your Conversion to a Roth

The Retirement Savings Contribution Credit, frequently referred to as the Saver’s Credit, was established to encourage low-to-moderate-income taxpayers to put funds away for their retirement.

Up to $2,000 per taxpayer of contributions to an IRA (traditional or Roth) or other retirement plans, such as a 401(k), may be eligible for a nonrefundable tax credit that ranges from 10% to 50% of the contribution, depending on the taxpayer’s income. The maximum credit per person is $1,000.The contribution amount on which the credit is based is reduced if the taxpayer (or spouse if filing jointly) received a taxable retirement plan distribution for the year for which the credit is claimed (including up to the return extended due date in the following year) or in the prior two years. If the modified AGI exceeds $32,000 (single and married separate), $64,000 (married joint) or $48,000 (head of household), no credit is allowed. The amounts indicated are for 2019. Call this office for the rates for other years. An individual who is under age 18, a full-time student, or a dependent of someone else is ineligible. The credit is in addition to any deduction allowed for traditional IRA contributions. 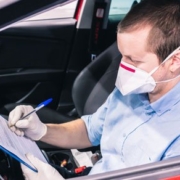 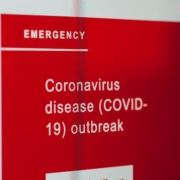 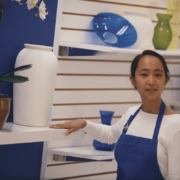