Federal tax laws allow each individual taxpayer to exclude up to $250,000 of gain from the sale of his/her main home, if he/she meets certain ownership and occupancy requirements. (A married couple that meets the qualifications can exclude up to $500,000.) If an individual/couple is unable to exclude all or part of the gain, then the gain is taxable as a capital gain in the year of sale.

Unless they meet the reduced exclusion qualifications, taxpayers must meet the ownership and use tests in order to qualify for exclusion of gain. This means that during the five-year period ending on the date of the sale, taxpayers must have:

Temporary Absence: Generally, a temporary absence would be for illness, education, business, vacation, military service, etc., for less than one year, and the taxpayer intends to return to the home, and continues to maintain the home in anticipation of such return.

Land: Generally, if a taxpayer sells the land on which his/her main home is located, but not the house itself, the taxpayer cannot exclude any gain from the sale of the land. However, the home sale exclusion will apply to vacant land sold or exchanged if the taxpayer owned or used the land as part of the principal residence, provided the disposition of the dwelling unit occurs within two years before or after the disposition of the vacant land, the land was adjacent to land containing the dwelling unit and the land sale or exchange otherwise satisfies the home gain exclusion requirements. Only one maximum exclusion amount applies to the combined sales/exchanges of both the home and the vacant land.

Ownership and Use Exceptions

Use Test After Divorce – In divorce situations, the terms of the divorce or separation document often allow one spouse to use the jointly-owned home for an extended period of time, then to sell the home and split the proceeds with the former spouse. When this happens, the spouse who does not occupy the home will no longer meet the use test and would be barred from excluding the gain except for a special rule for divorced couples. Under this special exemption, that spouse is considered to have used the property as his or her main home during any period they owned it.

Disability – Individuals who have become physically or mentally unable to care for themselves are considered to have used their home during any period that they own the home and live in a licensed facility, including a nursing home that cares for individuals with the taxpayer’s condition. However, to qualify for this exception, the individual must have owned and lived in his or her home for at least one year. This exception does not apply to the ownership test.

Irrevocable Trust Is Owner – Some taxpayers use revocable (living) trusts as an alternative to having their property transferred by will. A home owned in the name of a revocable trust is treated as being owned by the taxpayer for purposes of the ownership test, and such ownership does not jeopardize the ownership test for claiming the exclusion. However, when the first spouse of a married couple with a revocable trust dies, two things generally occur. The decedent’s trust becomes irrevocable and the portion of the home inherited receives a new basis (an exception may apply for decedents dying in 2010). If all or part of the home is placed in the decedent’s (bypass) trust, the IRS has ruled that to the extent a home is owned by an irrevocable trust, it is not owned by the surviving spouse, even if the surviving spouse continues to reside in the home. As a result, the portion of the home owned by the irrevocable trust would not qualify for the exclusion.

Death of Spouse Before Sale – If your spouse died before the date of sale and you do not meet the ownership and use tests yourself, you are considered to have owned and lived in the property as your main home during any period of time when your deceased spouse owned and lived in it as a main home.

Home Destroyed or Condemned – If you were able to defer gain from a prior home to your current home because it was destroyed or condemned, you can add the time you owned and lived in that previous home when figuring the ownership and use tests for the current home.

A taxpayer who meets the ownership and occupancy tests can exclude the entire gain on the sale of his/her main home up to $250,000, provided gain has not been excluded on a sale of another home within two years of the sale of the current home. The maximum exclusion amount is $500,000 if all the following are true:

Unless taxpayers qualify for the reduced exclusion, they can only exercise the exclusion once every two years.Therefore, taxpayers cannot exclude the gain on the sale of their home, if during the two-year period ending on the date of the sale, they sold another home at a gain and excluded all or part of that gain.

If the home was originally acquired via a Sec 1031 tax-free exchange, the home must be owned for a minimum of five years before a home-sale gain exclusion can be utilized, provided the taxpayer also meets the 2-year use test.

A taxpayer who does not qualify for the full exclusion may still qualify to exclude a reduced amount if the taxpayer(s) did not meet the ownership and use tests, or the exclusion was disallowed because of the once every 2-years rule, but sold the home due to:

a) A change in place of employment;
b) Health; or
c) Unforeseen circumstances, to the extent provided in IRS regulations.

More Than One Home

If a taxpayer has more than one home, only the gain from the sale of the taxpayer’s main home can be excluded, even if the other home meets the two-out-of-five-year ownership and use test. 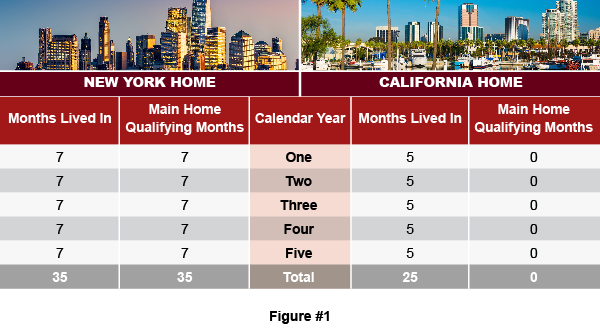 Gain or Loss on Sale

On the other hand, if you sell a home for a gain and the gain is more than your allowable exclusion, or you do not qualify for the main home exclusion, then the gain from the home sale becomes taxable as a capital gain in the year of sale.

The gain or loss from the sale of a home is the sales price less the sum of (1) the costs of selling the home and (2) the basis. Basis is a technical term used in taxes that generally represents the original cost plus the costs of improvements to the home.

That is why it is so important to maintain records and keep track of your home’s cost and subsequent improvements. In the tax business, this is referred to as tracking your basis. The exclusion amount may seem like a lot right now, but after a few years of inflation, you may discover it is not enough to offset the potential gain.

Other Factors Affecting Basis – There are numerous tax situations that can affect a home’s basis. The following are those most frequently encountered:

Business Use of the Home

Depreciation – The tax law assumes business assets will decline in value due to obsolescence and wear and tear. Therefore, taxpayers are allowed to take an annual deduction called depreciation, which represents the decline in value.

If the value increases instead, then upon its sale, any gain attributable to the depreciation is generally taxed at rates higher than the gain would otherwise be taxed.

Mixed-Use or Separate Property? When a home that was used entirely or partially for business is sold, the home gain exclusion may be limited, and some portion of the business deduction for depreciation may be taxable. How much of the gain is taxable, and the amount of gain that is subject to the gain exclusion, depends if the business portion was part of the dwelling unit (mixed-use property) or whether it was a separate structure.

Rental Converted to a Home

The sale of residential rental property is governed by an entirely different set of tax rules than those applying to an individual’s main home. However, had the home also been used as the taxpayer’s main home either before or after being used as a rental, then it can still qualify for the home sale exclusion if it meets the ownership and use tests. This can provide a significant tax benefit for individuals who carefully plan their sales. As with the home office, the rental’s depreciation is not subject to exclusion, and all or part may be taxable to the extent of the sale profit (gain).

However, if the home was previously used as other than a taxpayer’s main home (non-qualified use), for example, as a second home or a rental, and converted to a personal residence after December 31, 2008, the portion of the prorated gain attributable to the non-qualified use will not qualify for the home gain exclusion.

Taxpayers contemplating such a tax strategy should consult with this office in advance to verify qualifications and determine the tax implications, including depreciation recapture.

Separate Returns – If you and your spouse sell a jointly-owned home and file separate returns, each of you should figure your own gain or loss according to your ownership interest in the home.

Joint Owners Not Married – If you own a home jointly with other joint owner(s), other than your spouse, each of you would apply the rules discussed in this brochure to your individual ownership.

Credit Recapture – If you claimed a First-Time Homebuyer Credit and in a later year ceased using it as your residence, you may be required to repay some or all of the credit, depending on when you purchased the home and when it stopped being your residence or was sold.

Other Dispositions – Foreclosures, repossessions, and exchanges of your home are generally treated as sales.

Net Investment Income Tax – Gain from the sale of your home in excess of the amount excludable may be subject to this 3.8% surtax. Please call this office for additional information.

REFINANCED MORTGAGE INTEREST MAY NOT ALL BE DEDUCTIBLE

PLANNING, THE KEY TO YOUR FINANCIAL FUTURE

MORE THAN ONE HOME

IT’S ALMOST SUMMER – WHO IS CARING FOR THE KIDS WHEN YOU WORK?