This is Part 1 of 2 in a series on the proposed Tax Cuts and Jobs Act. This part covers the provisions that apply to individual taxpayers. Part 2 covers the small-business provisions.

The House of Representatives Way and Means Committee has finally released their version of the long-promised tax-reform legislation. This is the first step toward enacting new tax legislation. A Senate version is also required; if both versions pass, the two bills will then be reconciled, and both chambers of Congress will then need to pass the final bill before it can go to the President to be signed into law. There is no assurance that this tax-reform legislation will pass; it looks likely that the vote will largely be on party lines, so, if some Republican members of Congress do not vote with their party, the legislation could fail. Thus, it is important to stress that the information included in this article is on legislation that merely has been proposed and that is not law yet. However, this article will give you insight about what may be coming. The provisions described below would be effective in 2018 unless otherwise noted.

Itemized Deductions – Currently itemized deductions include medical, state and local taxes; home-mortgage Interest; charitable contributions; and miscellaneous deductions. The proposed act would substantially change what would be allowed as an itemized deduction.

Medical – Medical deductions, which currently are allowed for unreimbursed medical expenses that exceed 10% of adjusted gross income (AGI), would no longer be allowed.

Taxes – Under the proposed act, deductions for taxes would be allowed for property taxes only, and they would be limited to a maximum of $10,000. The currently allowed deductions for state and local income and sales taxes would no longer be allowed if this legislation is passed. This change is a huge point of contention for individuals who reside in states or localities that have high income taxes. Strategy: If you normally itemize your deductions or if you are right on the cusp of qualifying to itemize under current rules, it may be appropriate to estimate your state and local income taxes for 2017 and to pay that amount by way of withholding or estimated taxes before year-end – just in case state income taxes are no longer deductible after 2017.

Home-Mortgage Interest – Currently, taxpayers can deduct interest on up to $1 million of home-acquisition debt and up to $100,000 of home-equity debt from primary residences and second homes. The proposed legislation would reduce the $1 million limit on home-acquisition debt to $500,000 for homes purchased after November 2, 2017. The $1 million cap will continue to apply to mortgages that were already in existence as of November 2, 2017, as well as to mortgages resulting from binding written contracts that were entered into before that date.

However, many taxpayers may be concerned because the act would disallow home-equity debt interest and second-home interest deductions.

Charitable Contributions – Charitable contributions would continue to be deductible; in fact, the limitation would increase from 50% to 60% of AGI, thus allowing those who itemize to deduct larger contributions.

Miscellaneous Itemized Deductions – This is a sort of catch-all category for deductions; the act would make the following changes:

Exemptions – Under today’s law, a personal exemption of $4,050 is allowed for the filer, for his or her spouse (if married), and for each dependent. Under the proposed legislation, these exemptions would be repealed.

Tax Rates – Under current law, there are seven tax brackets; 10, 15, 25, 28, 33, 35 and 39.6%. The proposed tax rates would be 12, 25, 35 and 39.6%. The brackets in both versions operate as step functions, which means that the income within each bracket is taxed at that bracket’s rate; the income exceeding a given bracket is taxed at the next-highest bracket’s rate. The tables below illustrate the current and proposed tax brackets. 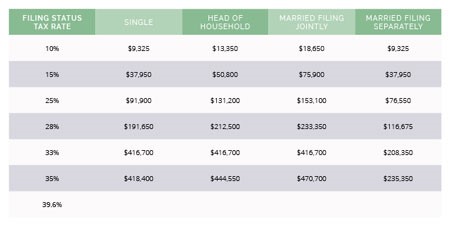 The act would also add a new, complicating twist to the tax calculation that phases out the benefit of the 12% bracket for those with adjusted gross incomes of over $1,000,000 (or $1,200,000 for joint filers).

These credits would phase out for taxpayers with income of at least $115,000 for single filers or $230,000 for joint filers.

Capital-Gains Tax – The act retains the special rates for long-term capital gains but increases the range for the 15% bracket. The following table illustrates the taxable incomes at which the capital-gains tax rates would apply.

Education Benefits – A number of education benefits are currently included in the tax code. Here is how the act would affect each.

Coverdell Education Savings Accounts – No further contributions to these savings accounts would be allowed after 2017; the act would allow current funds to be rolled into a Sec 529 plan.

Sec 529 College Savings Plan – Contributions to these plans would continue under the new act, which would add a provision allowing up to $10,000 a year to be used for elementary-school and high-school education expenses.

Higher Education Interest – The act would repeal the currently allowed deduction of up to $2,500 for higher-education student-loan interest.

Employer Provided Education Assistance – The act would repeal this $5,250 tax-free benefit that is available to employees under existing law.

American Opportunity Tax Credit (AOTC) – The AOTC currently provides a tax credit of up to $2,500 for up to 4 years of eligible students’ higher-education expenses. Up to 40% of the AOTC is refundable; it phases out for higher-income taxpayers. The act would enhance the AOTC by increasing its extent from 4 to 5 years, although the credit in the 5th year would be limited to $1,250, no more than $500 of which would be refundable.

Lifetime Learning and Hope Credits – The act would repeal both of these credits.

Employer-Provided Dependent Care Assistance – Existing law allows employees to exclude from their annual income up to $5,000 ($2,500 if married filing separately) of the value of their employer-provided dependent-care assistance for each child under age 13 and for each spouse or other dependent who is physically or mentally unable to care for themselves. The act would repeal this exclusion.

Plug-In Electric Motor Vehicles – There is currently a credit of up to $7,500 for the purchase of a qualified electric vehicle. The act would repeal this credit for vehicles placed in service after 2017. Strategy: If you are contemplating the purchase of a qualifying electric vehicle, make sure to take possession of and begin using the vehicle before the end of 2017, just to be on the safe side.

Home-Sale Exclusion – Currently, taxpayers can generally exclude $250,000 ($500,000 if married filing jointly) of gains from the sale of a primary residence if the taxpayer has owned and used the home as a principal residence for at least 2 of the past 5 years immediately prior to the sale. For sales completed after 2017, the act would change the ownership-and-use requirement to at least 5 out of the prior 8 years and would only allow one exclusion every 5 years. In addition, the act would limit the exclusion for higher-income taxpayers by phasing out the exclusion by one dollar for every dollar for which a taxpayer’s AGI exceeds $250,000 ($500,000 if married filing jointly).

Adoption Expenses – Currently, lower-income taxpayers are entitled to a credit for adoption expenses of up to $13,570. When an employer reimburses an employee for adoption costs, up to $13,570 of that reimbursement is tax-free to the employee. The act would repeal both of these provisions.

Roth IRA Recharacterizations – Under current law, a taxpayer may convert a traditional IRA to a Roth IRA by paying tax on the converted amount. The House of Representatives Way and Means Committee has If, for some reason, he or she regrets making this conversion, the contribution can then be recharacterized back to a traditional IRA, essentially undoing the original conversion. The act would repeal the recharacterization provision so that, once a conversion is made, the taxpayer would not be able to undo it.

401(k)s – In the days before releasing the details of the act, an idea was floated to substantially reduce the annual amount of pretax contributions that could be made to 401(k)s and similar retirement plans. The act does not include this proposal.

Estate Taxes – Under current law, a decedent’s estate is subject to tax on the amount that exceeds the current inflation-adjusted lifetime limit on consolidated gifts and estates, which is $5.49 million for 2017. The act would increase the lifetime limit to $10 million, annually adjusted for inflation; the inflation-adjusted amount is not known at this time. In addition, the act would repeal the estate and generation-skipping taxes after 2023 while maintaining beneficiaries’ stepped-up basis in estate property.

Alternative Minimum Tax (AMT) – There is currently an alternative way of computing a taxpayer’s liability while limiting deductions and adding preference income. When the AMT is higher than the regular tax, the AMT applies. The act would repeal the AMT.

The forgoing is only an overview of the provisions that would affect individual taxpayers; of course, there is no guarantee that the act will pass without changes – if it passes at all. Please give this office a call if you have any concerns or questions about the proposed changes.

BACK TO SCHOOL? TAX BREAKS MAY HELP TO PAY THE COST!

TAX FILING DEADLINE IS AROUND THE CORNER

GIFTING CONSEQUENCES TO THINK ABOUT
0 replies

POSSIBLE TAX REFORM AND WHAT IT MEANS FOR YEAR-END PLANNING

WHAT IS A KPI?
Scroll to top