Even though the tax code mandates minimum distributions after reaching age 70½, there is no maximum limit on distributions, and the retirement plan owner can withdraw as much as he or she wishes. However, if more than the required distribution is taken in a particular year, the excess cannot be applied toward the minimum required amounts for future years.

The required withdrawal amount for a given year is equal to the value of the retirement account on December 31 of the prior year divided by the life expectancy from the Uniform Lifetime Table. 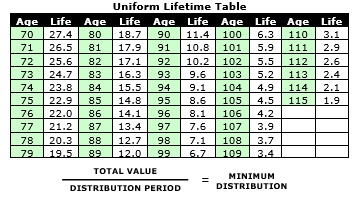 Two tables are not illustrated above because of their size: the Joint and Last Survivor Table, which is used to determine RMDs when the sole beneficiary is a spouse who is more than 10 years younger than the plan owner; and the Single Life Table, which is used for certain beneficiary RMD determinations. For table values that are not illustrated above, please call this office.

If in the preceding example, if the taxpayer does not withdraw the $5,240, he would be subject to a 50% penalty (additional tax) of $2,620 ($5,240 x 50%). Under certain circumstances, the IRS will waive the penalty if the taxpayer demonstrates reasonable cause and makes the withdrawal soon after discovering the shortfall in the distribution. However, the hassle and extra paperwork involved in asking the IRS to waive the penalty makes avoiding it highly desirable; to do so, always take the correct distribution in a timely manner. Some states also penalize under-distributions.

Even though a qualified plan owner whose total income is less than the return filing threshold is not required to file a tax return, he or she is still subject to the RMD rules and can thus be liable for the under-distribution penalty even if no income tax would have been due on the under-distribution.

Beneficiaries: Someone who inherits a qualified plan must generally begin taking RMDs no later than December 31 of the year following the owner’s death. If the plan owner died prior to taking his or her RMD for that year, the beneficiary must generally take the regular RMD, which is based on the deceased owner’s age, by the normal deadline (December 31) to avoid potential penalties. However, some of the complications associated with beneficiary distributions are not covered here; please call this office for additional information and requirements.

IRA to Charity Transfers: A provision of the tax code allows taxpayers age 70½ or over to transfer up to $100,000 annually from IRAs to qualified charities. This provision may provide significant tax benefits, especially for those who would be making large donations to charities anyway.

Here is how this provision, if utilized, plays out on a tax return:

At first glance, this may not appear to provide a tax benefit. However, by excluding the distribution, a taxpayer lowers his or her adjusted gross income (AGI), thus allowing him or her to attain certain tax breaks (or avoid certain punishments) that are pegged at AGI levels. Related tax benefits include those related to medical expenses, overall itemized deduction limitations, passive losses, and taxable Social Security income. In addition, non-itemizers receive the benefit of the charitable contribution deduction to offset the IRA distribution.

In many cases, advance planning can minimize or even eliminate taxes on qualified plan distributions. Often, situations arise in which a taxpayer’s income is abnormally low due to losses, extraordinary deductions, or other factors, meaning that taking more than the minimum in a given year can be beneficial. This is true even for those who do not need to file a tax return but who can increase their distributions and still avoid any tax.

If you need help planning your distributions or calculating your RMD for the year, please call this office for assistance.

REFINANCED MORTGAGE INTEREST MAY NOT ALL BE DEDUCTIBLE

WILL YOUR FAVORITE TAX BENEFIT EXPIRE?

PREPARING FOR YOUR CHILD’S FUTURE EDUCATION

US TAXES AND MOVING OVERSEAS
Scroll to top