With the historic flooding and damage caused by recent hurricanes, President Trump has declared the affected areas disaster areas. If you were an unlucky victim and suffered a loss as a result of these disasters, you may be able to recoup a portion of that loss through a tax deduction. When you suffer a casualty loss within a federally declared disaster, you can elect to claim the loss in one of two years: the tax year in which the loss occurred or the immediately preceding year.

Income Tax Casualty Loss – By taking the deduction for a 2017 disaster area loss on the prior year (2016) return, you may be able to get a refund from the IRS before you even file your tax return for 2017, the loss year. You have until six months after the original due date of the 2017 return to make the election to claim it on your 2016 return, in most cases by filing an amended 2016 return to claim the disaster loss. Before making the decision to claim the loss in 2016, you should consider which year’s return would produce the greater tax benefit, as opposed to your desire for a quicker refund.

If you elect to claim the loss on either your 2016 original or amended return, you can generally expect to receive the refund within a matter of weeks, which can help to pay some of your repair costs.

If the casualty loss, net of insurance reimbursement, is extensive enough to offset all of the income on the return, whether the loss is claimed on the 2016 or 2017 return, and results in negative income, you may have what is referred to as a net operating loss (NOL). When there is an NOL, the unused loss can be carried back two years and then carried forward until it is all used up (but not more than 20 years), or you can elect to only carry the unused loss forward.

Determining the more beneficial year in which to claim the loss requires a careful evaluation of your entire tax picture for both years, including filing status, amount of income and other deductions, and the applicable tax rates. The analysis should also consider the effect of a potential NOL.

Ordinarily, casualty losses are deductible only to the extent they exceed $100 plus 10% of your adjusted gross income (AGI). Thus, a year with a larger amount of AGI will cut into your allowable loss deduction and can be a factor when choosing which year to claim the loss.

For verification purposes, keep copies of local newspaper articles and/or photos that will help prove that your loss was caused by the specific disaster.

As strange as it may seem, a casualty might actually result in a gain. This sometimes occurs when insurance proceeds exceed the tax basis of the destroyed property. When a gain materializes, there are ways to exclude or postpone the tax on the gain.

Extension of Filing and Payment Due Dates – The IRS has announced that Hurricane Harvey and Irma victims have until Jan. 31, 2018, to file certain individual and business tax returns and make certain tax payments.

As a result, affected individuals and businesses will have until Jan. 31, 2018, to file returns and pay any taxes that were originally due during this period. This includes:

The IRS automatically provides filing and penalty relief to any taxpayer with an IRS address of record located in a disaster area. Thus, taxpayers need not contact the IRS to get this relief. However, if an affected taxpayer receives a late filing or late payment penalty notice from the IRS that has an original or extended filing, payment or deposit due date falling within the postponement period, the taxpayer should call the number on the notice to have the penalty abated.

In addition, the IRS will work with any taxpayer who lives outside of a disaster area but whose records necessary to meet a deadline occurring during the postponement period are located in the affected area. Taxpayers qualifying for relief who live outside the disaster area need to contact the IRS at 866-562-5227. This also includes workers assisting the relief activities who are affiliated with a recognized government or philanthropic organization.

The tax relief is part of a coordinated federal response to the damage caused by severe storms and flooding and is based on local damage assessments by FEMA. For information on disaster recovery, visit disasterassistance.gov.

For information on government-wide efforts related to:

If you need further information on filing extensions, casualty and disaster losses, your particular options for claiming a loss, or if you wish to amend your 2016 return to claim your 2017 loss, please give this office a call. 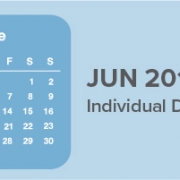 PLAN FOR SELLING YOUR HOME

BIRTH OR ADOPTION OF A CHILD

ARE YOUR IMPORTANT TAX DOCUMENTS SAFE IN CASE OF A DISASTER?
Scroll to top