For two years, employees have enjoyed a 2% reduction in the FICA payroll tax. That will all come to an abrupt end beginning with their first payroll check in 2013 when the FICA rate returns to 6.2% (up from 4.2% in 2011 and 2012). Self-employed individuals will have a corresponding increase in their SE tax.

Employees who made more than $110,100 in 2012 enjoyed a period of time with no FICA withheld, but FICA withholding will return at the full 6.2% rate with the first paycheck in 2013.

To make matters worse, as part of the Obamacare legislation, higher income taxpayers are faced with an additional 0.9% health insurance (HI) tax. Starting in 2013, this surtax is imposed upon wage earners and self-employed taxpayers whose wage and self-employment income exceeds $250,000 for married taxpayers filing jointly ($125,000 if filing separately) and $200,000 for all others.

Although each employer will withhold the additional tax, the employer is not required to account for other employment or both spouses working. Thus, in these situations when the total earned income exceeds the threshold amounts, the unpaid tax will have to be included on the 2013 tax return.

Please give this office a call if you have additional questions. 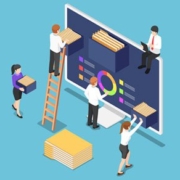 PREPARED FOR THE NEW SURTAX?
Scroll to top